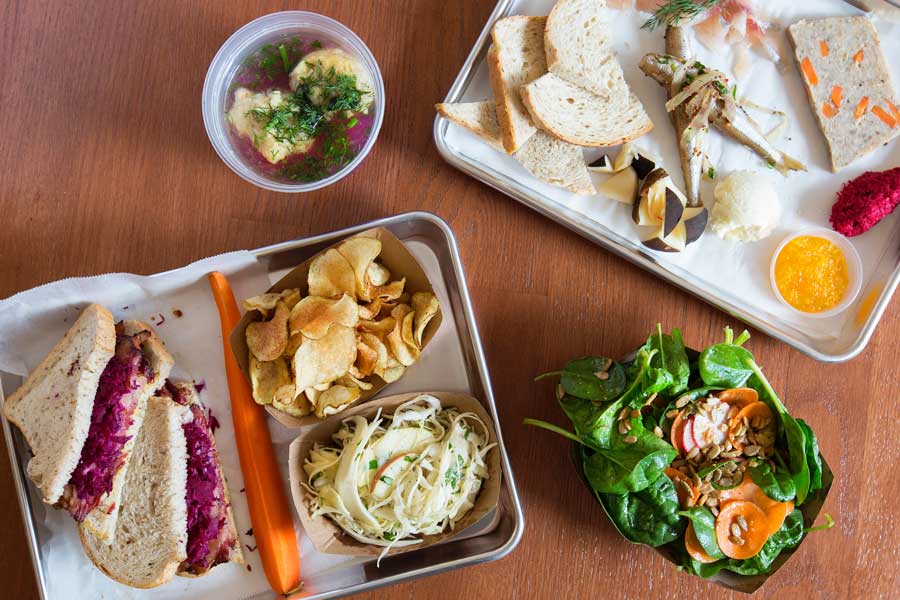 Why does a food, a living cultural link to our past, present, and future, become forgotten? Does the time and place in which each food is enjoyed hold the only supreme relevance for its enjoyment?

As Jews we have faced countless trials, tribulations, and atrocities. We live our lives constantly hearing and repeating the phrase “Never forget!”. Why then have we accumulated a massive library of foods that sit on shelves to gather dust and wither from all popular memory? “Never forget” should reach to all aspects of our culture, not just the crimes perpetrated against us. If we forget the good things, especially the delicious tangible things, that make us who we are then are we doomed to dwell in a constant state of yearning for the good days past?

Foods become forgotten for many reasons:

Socioeconomic constraints dissolve and allow for the purchase and consumption of what is believed to be a better ingredient. Pastrami is a prime example of this. Brought to America by Romanian immigrants it was originally made from goose which was a very inexpensive meat at that time. Over time it transformed to come from beef navel (belly) and eventually brisket. As we gained in prosperity in a new land we believed the cost associated with an ingredient would be reflective of our status in society. Brisket was the most costly ingredient and if you could afford it you were doing well.

The relocation to and settlement of new lands comes with a new palette of ingredients that become adapted to old recipes. Sometimes there is no substitute and the dish is disbanded. The latke is a food that has gone through this transformation. Latkes arose amongst Jews living in Spanish occupied Sicily in the 1400’s. They were originally made from a naturally fermented batter of durum flour and ricotta cheese. Due to the Inquisition we were expelled from Spanish lands. As we made our way to Eastern Europe durum was not readily available and it was eventually replaced by the potato.

There is a desire for one generation to distance itself from another. Our wants change over time while our needs will always be the same. More often than not the specific wants of a new generation are something the previous generation couldn’t imagine or comprehend. The eating of organ meat is something that follows this pattern. Newer generations don’t want to eat liver like their parents did.

Outside influence and adulteration of our food system change our ideals in relation to food. Schmaltz is bad and vegetable oil is good, carp is dirty and farmed salmon is good… Industrialized food manufacturers and their supply chain partners want you to use the foods that they sell. They’ve done a great job of promoting specific foods as what you want.

Here are some some of the forgotten foods and food traditions that have strong ties to various Jewish identities of days past. These foods and their tradition fell out of favor due to various combinations of the previously listed reasons.

The latkes roots have virtually been completely erased from memory. Thanks to a few gastronomic scholars we’ve been able to preserve their history. Below you’ll find a recipe for latkes as they would have been enjoyed in 15th century Sicily.

The magical thing about this latke is that you can always reserve a bit of the final batter to add to your starter for the next batch. Keep this bit of batter in the fridge until you plan to use it. This mimics the Hanukkah story in which 1 small container of lamp oil, enough for 1 night, burned for 8 days. If taken care of this starter can last a generation or more.

While caviar is as popular as ever in fine dining establishments this foods origins were much more humble. It is true that certain types of caviar, the salted eggs of fish, have always been a high end commodity there are many types of caviar that were once the province of the masses. The eggs of salmon, trout, whitefish, and even carp have been an inexpensive and nutrient dense food for Jews hailing from places as diverse as Persia and Bucharest. The making of caviar is something that could be done before Shabbat so that it could be enjoyed for lunch on Shabbat. Making caviar requires nothing more than roe, salt, water, and time.

The crafting of caviar is nothing to be intimidated by for it’s fairly straightforward. Separate the eggs from the membrane that binds them, wash them, massage the remaining bits of membrane away, and finally, brine the eggs. Once brined the eggs are transformed from roe into caviar.

The curing of meats into ham is a tradition as old as humanity. Jews and Jewish cuisine is often not associate with cured meats due to the prohibition of pork under the laws of Kashrut. In many languages the word for ‘ham’ is synonymous with ‘cured meat(s)’. Only in English do we specifically associate ham with pork. Jews from Italy, France, Spain, Ukraine, Poland, Russia, Hungary, and many other countries have made cured meats for millennia. Beef, lamb, duck, and goose have been used to make these hams to keep in line with kosher food laws. The hams produced by Jewish butchers in Alsace, France were considered to be the finest in all of France for centuries. While many of us are familiar with the salami at the delicatessen we should get back to our roots and make Jewish Ham at home.

The production of cured meats is nothing to be intimidated by. Jews with less understanding than us of food science and safety have made hams without incidence for a long time. To make a Jewish Ham all you need is salt, meat, and time.

Gribenes are crunchy bits of skin from poultry that are left over after you make schmaltz (rendered poultry fat used for cooking). Gribenes and other offal such as brains, liver, feet, tongue, and heart have a storied history and at various times were the only protein you would find in Jewish households. As we emigrated from Eastern Europe to America we gained new prosperities and developed a want for foods we had not previously enjoyed. This coupled with the fat-free movement of the past 30 years have pushed gribenes and other offal into obscenity. We now know that when used in moderation fats and offal from happy, healthy, pasture raised animals are healthy especially when compared to processed industrialized oils and fats and processed foods.

To make gribenes slowly cook poultry skins over low heat until the skins are golden brown and delicious. Gribenes are delicious when sprinkled on matzoh ball soup, cooked into scrambled eggs, or mixed into the stuffing for stuffed cabbage.

Eingemachts are preserves made from vegetables. Historically they were made from everything from cabbage to turnips to carrots. These preserves were a favorite amongst Yiddish speaking Jews in the shtetlekh of Germany and other countries in Eastern Europe. Fresh fruits were only available during summer and early fall for most of our collective history so during other times of the year other foods took their place. In today’s world we can get an type of fruit we want at any time of the year. This led to the near extinction of these vegetable preserves. Eingemachts are used just as you would use your favorite grape jelly. Pair them with anything from peanut butter on a sandwich to a sauce used to garnish roasted meats.

Gogel Mogel has roots that go back to at least the 17th century and most likely predates that by a hundred years or more. It’s unique in that it’s considered both a home remedy for a sore throat and a luxurious dessert. The most common contemporary food that Gogel Mogel can be compared to is eggnog but that’s in appearance only for they have very different histories and traditions behind them. Gogel Mogel was born under the empire that the Tzars built and was enjoyed from the Balkans to Poland to Ukraine. At its most simplistic it is raw egg yolks mixed with sugar. Popular variations eventually sprung up and include the addition of liquids such as warmed milk and schnapps and spices and flavorings ranging from chocolate and vanilla to cinnamon and clove.