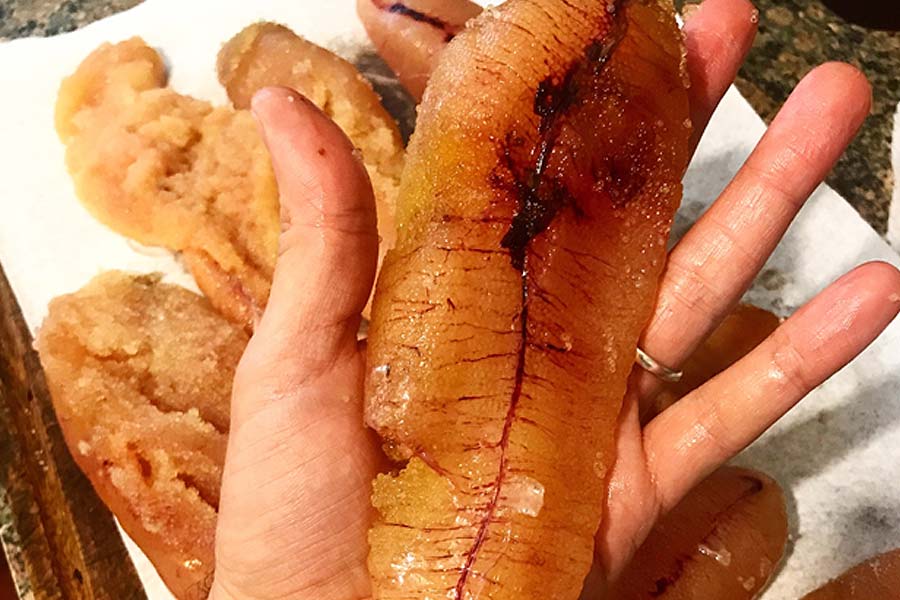 There’s something powerful in your kitchen. Wars have been waged for it and peace has been brokered with it. Civilizations have been built on it and cities have been named after it. It is something we deeply crave and is vital to our health. No, I’m not talking about chocolate. I speak of salt. Salt is something that we take for granted. It is found in all our homes, on our restaurant tables, and in every market.

Let’s take a moment to trace the history of salt in order to enforce its importance. After we’ll discuss some of the fun and thrilling things you can do with salt in your home. The earliest known salt works, places where salt was purified for consumption, date back to 6,000 BCE in Romania and China. The Latin word for salt, sal, is the root word for salary. Roman legionaries were paid wages to either purchase salt or actually paid in salt for their work. The word salad, a derivative of sal, can even be traced to the Roman practice of salting vegetables. The search for and production of salt is said to have partially funded Christopher Columbus on his voyages to discover new trade routes to India. Salt (cod) was a staple food and commodity during the years that the Slave Triangle was active in the Atlantic Ocean. The overthrowing of British rule in India can be traced to Ghandi traveling to the sea to make salt, a forbidden act at the time due to the British taxing salt to fund their imperialistic ventures.

In modern times we rely on salt for far more than seasoning our food. In fact, many foods that we cherish need to be made with salt. Cured meats, cheeses, and pickled & fermented vegetables all need salt to be produced. Salt goes even further in the kitchen and can be used to encase and cook food. It even does a fantastic job at cleaning and conditioning your favorite cast iron cookware. Outside the kitchen we use salt to keep our roadways free of ice and to purify metals as they’re smelted. We use salt to condition our drinking water and can even use salts to produce safe, biodegradable, non-hazardous chlorine bleach. One of the questions that I often hear when talking about salt is “Which one do I use?”. Nowadays one can find a dizzying array of salts at their local grocer. On a recent trip to Cleveland’s Westside Market I saw iodized salt, purified salt, pickling salt, curing salt, several different types of sea salts, kosher salt, and artisan pink, red, purple, & black salt. Oh my science! The question of “Which one do I use?” really struck a chord with me. Where does one begin? The best place to start is with the two main types of salt we use today in our kitchens. Those would be mined salt and panned, or evaporated, salt.

Mined salt is the remnant of ancient seas and oceans that were trapped as our continents shifted and morphed. When these bodies of water were trapped natural processes and events took place that caused all the water to evaporate away. What was left was salt. Over the course of eons more tectonic shifting occurred and buried these layers of salt deep into the earth. The salt mine under Lake Erie is a prime example of this. Salt produced by mining can be left as is, as is the case with Himalayan pink salt, or it can be dissolved in water to remove undesired trace minerals, remnant algae, and other fossilized organic matter in order to purify it. After the impurities are removed the water is evaporated away and you’re left with purified salt.

During this process iodine, nitrites & nitrates, and anti-caking agents can be added to and blended into the salt to produce different types of salt that have different culinary applications. Panned, or evaporated, salt is produced by taking naturally salty water and evaporating the water out until only salt is left. This isn’t merely done with seawater. In fact, the ancient saltwork in Romania that I previously mentioned made use of salt water from a natural spring not seawater. The salty spring water would be placed into shallow pans, hence the name ‘panned salt’, and set in the sun to evaporate thus yielding salt. Panned salts can be purified and fortified the same ways that mined salts are.

Now that we’ve broken the two main types of salts down we can look a little closer at what I refer to as ‘Artisan Salt’. These salts include such fancy names as Red Alae and Black Cyprus. These are salts that were devised in different geographic locals to reflect the gastronomic preferences of said area. These salts are typically used as garnishing salts. They add different flavors, textures, and colors to cooked food that help accentuate and or bring cohesion to the final flavors and composition of a dish. Red Alae is a salt from Hawaii that is fortified with a type of red clay that was used to make cookware. It pairs well with clams and duck, foods that are found in environments with lots of clay. Black Cyprus is a salt that is tossed with ashes to give it a charred smoky flavor. It is best used sprinkled on a steak as it comes off the grill. Keep in mind that the size and shape of the salt crystals also plays a role. Large granules are good to use when you want to add a salty crunch that lingers in your mouth. Small and flat granules are good when you want a sharp salty rush at the beginning of a bite. Sea salts pair well with seafood while kosher salt is an all-purpose go to.

Now that you know a little bit about what different salts are you can choose the right one for the gastronomic adventure of your choosing. 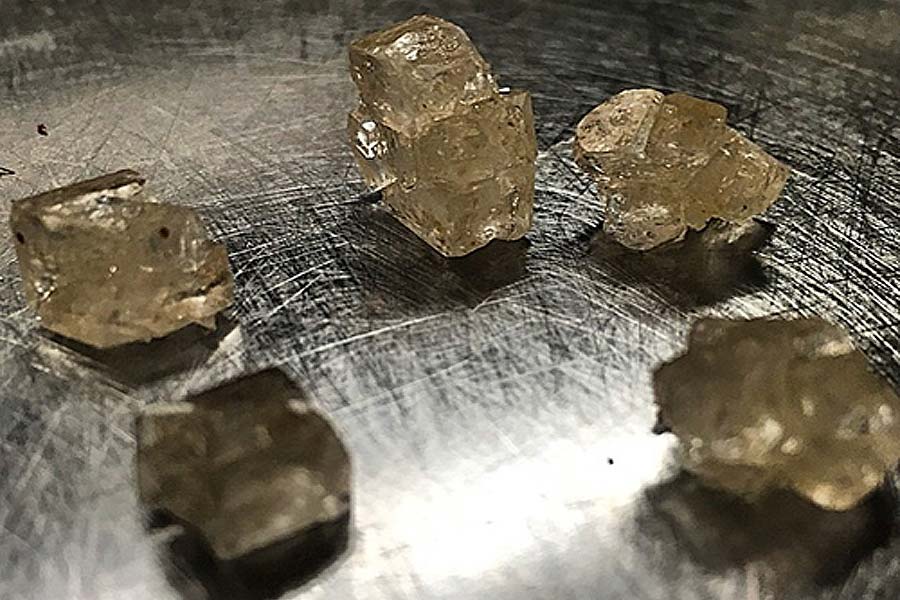 Salt Crystals That I Grew
What can you do with salt in your kitchen besides seasoning your food with it? Lots! Here’s a few of my favorite things to make using salt:

Salt baking is a technique where salt is bound with a little egg and used to encase a food. The encased food is then baked until cooked. The wonderful thing about salt baked foods, aside from the amazing taste and perfection in how the food turns out, is the presentation. You bring out what your diners see as a hunk of salt to the table and set it before them. You then proceed to, dramatically, break apart the salt crust releasing a delicious and mysterious cloud of steam that clears to reveal perfectly cooked food! Try this recipe for salt crusted fish. It’s low maintenance and will become your go to weeknight meal.

Preheat your oven to 400*F. Combine the salt and eggs and mix until it has a texture like damp sand. If the salt is too dry to clump together when you squeeze a handful of it then add water, a tablespoon at a time until it comes together. Place a thin layer of the salt in a baking dish the size of your fish. Stuff the fish with the lemon and herbs and place it on the salt. Fully and tightly cover the fish with the remaining salt. Bake for roughly 35 minutes for a 1 pound fish and 45 for a two pounder. If you have excess salt then use the same technique on a mixture of whole unpeeled carrots, potatoes, and beets. They’ll be ready after about 45 minutes. You can even bake all this together in the same dish if you choose.

Bottarga is an ingredient that is sadly missing from many of our kitchens. It is the salted and pressed eggs of tuna or red mullet. Bottarga was developed on the Italian island of Sardinia. It is used much in the way that anchovies are, as an underlying enforcing ingredient. Making bottarga at home is a simple as burying fish eggs in salt and then letting them dry out. In this version I use lobster eggs. Obtaining lobster eggs is fairly straightforward, purchase a live female lobster and remove the egg sacks. You can source lobster eggs by themselves but most of the time there’s a 1# minimum.  Try grating them over scrambled eggs or pasta. You’ll wonder where bottarga has been your whole life.

Spread a layer of salt on the bottom of a non-reactive dish. Lay the lobster eggs on the salt and completely cover them with more salt. Leave them out at room temperature for 24-36 hours. After the 24-36 hours remove the eggs from the salt and briefly rinse them under cold water to wash the salt off. Set the eggs on a drying rack in your fridge and let them dry out until they’re hard. Once dry the eggs are shelf stable and can be stored in a mason jar in your pantry.

I developed a technique for recycling the salt used during the curing of meat by recrystallizing it in flavored brine. This technique can be implemented with fresh salt and will yield awesome results. The recipe below uses lemon as the flavoring agent but you can use anything from ashes to beef jerky to strawberries.

Combine the zest, water, lemon juice, and salt to make the brine. Stir until the salt completely dissolves. Tie the skewer to the twine and then suspend it vertically in the jar ensuring that the skewer hovers 1” above the bottom of the jar. Pour the brine into the jar and let it sit until you see crystals start to grow on the skewer. This could take weeks to over a month. Once crystals start to form take the skewer out and spray them with the brine. Allow the brine to dry on the crystals then submerge them back in the brine. Do this every week until all the brine has evaporated. Once the crystals have fully formed break them off the skewer and enjoy!

I encourage you to explore all that salt can do for you in your kitchen. Share your ideas and creations with me, @TMGastronaut or @larderdb on Twitter and Instagram.